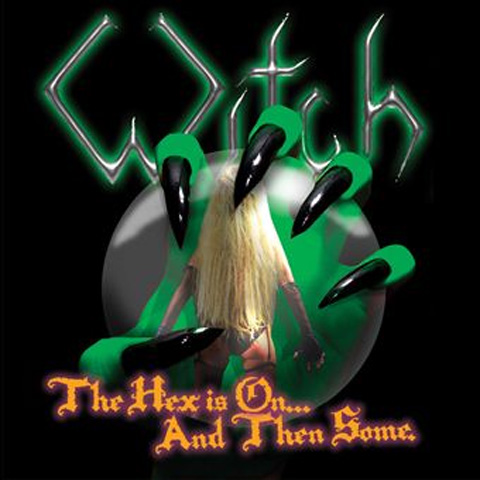 Witch -The Hex Is On And Then Some cd

2011 compilation featuring the entire The Hex Is On and Nobody Sleeps with bonus material. Guest performances by Slash, Steve Stevens, Keith Emerson and Chris Holmes.

Witch from Los Angeles starated out in 1981 as Ampage and they wrote material under that name for a few years before playing their very first show as Witch on June 11, 1983 at The Woodstock in Anaheim, CA. The band were infamous in the early glam scene of L.A. The band concentrated much effort into their stage shows, which included excessive use of pyrotechnics. They were regarded as leading lights of the glam scene, really one of the biggest hopefuls in the L.A., along with bands such as Motley Crue and W.A.S.P, and much of this hype was due to their wild live gigs and Punky Peru’s crazy rock drummer antics. Drummer Punky Peru was married to Tommy Lee’s sister, Athena Bass, and they divorced in 1986. She had Punky arrested for domestic abuse, and he served six months in the Orange County Jail in 1987. Before going to jail he met and moved in with Lita Ford, and he co-wrote the song Fatal Passion on Ford’s platinum-selling Lita album. Lita Ford would also jam with the band on stage occasionally during this period. Witch played with most of the local bands and many of those more famous acts were even performing as opening acts for Witch. They shared stage with acts such as Slayer, Lizzy Borden, Keel, Overkill, Megadeth, Exciter, and the list goes on. However the band really missed their chance. The Hex Is On EP is one of the few actual releases that saw the light of day through a talent agency the band was working under. A ton of line-up changes and internal dissension would seal the band’s fate during their original run, and the labels simply passed over them. One listen through The Hex is On and you can start to reason out why, for this is fairly typical heavy metal that was coming from all corners of the nation back in those days, and there is not much to lift it past the competition, especially when bands like Slayer and Metallica were taking the California audience by storm. That said, Witch is far heavier than your average glam metal band, even though they gigged a lot with hairspray queens and poseurs. These gentlemen might have once entertained that look (similar to Lizzy Borden), but they play pure heavy metal rooted in the early 80s tradition derived from Judas Priest, KISS, Saxon, Twisted Sister and Accept. The vocals of Peter Wabbitt stick around the mid range, and the riffs are fairly basic, but combined with the echoing thunder of Peru’s drumming and the thick as thighs bass, they manage to get the heads banging even if they don’t have much in the way of memorable songwriting. This is super lo-fi metal here, with an uneven production loaded in reverb and instruments that are not always mixed to their potential. If you’re into dirty, hot, fun 80s metal like Krank, Twisted Sister, early Lizzy Borden, or the more aggressive hard rock bands that were kicking around Southern California in these times, then you could certainly spin this for a healthy helping of nostalgia, but that’s about the maximum impact you will achieve here. The band released the Nobody Sleeps single in 1988 and broke up shortly afterwards. They reformed in 2008 and hired on Betsy Bitch of the old 80s metal band Bitch as vocalist. So overall Witch is a splendid example of a band who’s hype and history surpasses the actual music, but the fact that they’re still jamming some of these tunes on a stage is nothing short of admirable.