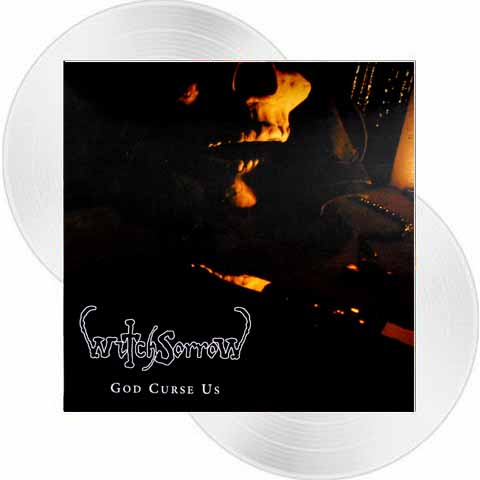 Recorded in queerest Wales over Halloween 2011, God Curse Us marks the sophomore resurgence of Witchsorrow — a mysterious power trio whose vintage doom sound and occult subject matter affix heavy metal history to the release of Black Sabbath’s Master of Reality some 40 years earlier. The bandmembers openly admit their debts, though, claiming no pretense to improve upon heavy metal’s original masters, but merely carry on with their dark work, and this honesty is largely vindicated by this set’s creative reshuffling of such well-worn musical ingredients. Opener “Aurora Atra,” for example, reconfigures passages inspired by the Sabs’ “Warning,” “Hand of Doom,” and “Children of the Grave”; the ominous “Megiddo” echoes the haunted psychedelics of “Sleeping Village” and shrill Iommi licks of “War Pigs”; while the unnaturally fast-charging “Breaking the Lore” is Witchsorrow’s own “Paranoid.” Now, contrary to this principal thesis, perhaps there are a few of Electric Wizard’s new-millennium excesses reflected in the protracted song lengths of the title track, “Den of Serpents” (see hypnotic coda), et al. — not to mention their Hammer horror soundtrack kinks in the instrumental interlude “Ab Antiquo.” Moving even further away from the Sabbath bloodline, one could make a good case that the exponentially slothful grind that is “Masters of Nothing” owes something to the modern funeral doom aesthetic and, heck, singer Necroskull’s harsh growls really sound nothing like Ozzy throughout. Still, Witchsorrow’s dominant sonic philosophy remains relatively pure to those early-’70s analog values, and this should ensure that the vintage charms of God Curse Us will prove all too beguiling for doom purists to resist.