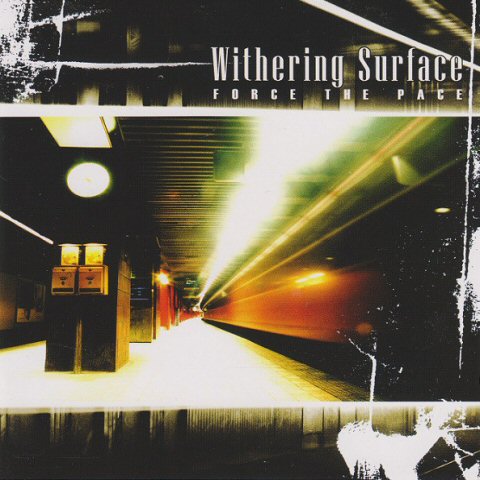 Already a decade into their troubled career come 2004, Denmarks Withering Surface have haunted the outskirts of death metal success for far too long; and given this albums competent but generally indistinctive contents, chances are they’ll be relegated to the fringes for still a while longer. You’ve heard the tale a hundred times: hard working unit has a tough time hanging on to a stable line-up, stumbles from one nearly-bankrupt indie label to another every other year, and fails to secure a loyal following due to sporadic touring and some ill-advised trend-hopping along the way. Such was the case for Withering Surface, who after years immersed in the melodic/gothic Gothenburg style of death metal, now appear to have reinvented themselves as neo-thrashers (hence the self-explanatory album title Force the Pace) like current outfits Hatesphere, the Haunted, and Arch Enemy, to name but a few. Not that Withering Surface don’t have the experience or the sheer moxie to pull off the switch (vocalist Michael H. Andersen’s spitting, screeching delivery actually suits itself perfectly to neo-thrash); it’s just that their songwriting remains merely proficient without actually qualifying as great. Songs like Exit Sculpture, This View and Anything Goes race by with single-minded intensity and almost inexistent qualities worth mentioning (or remembering); and it’s usually only when they resort to well-placed bits of techno-derived synth effects (see opener Gears, the harmony-heavy Hold the Line, and the initially trip-hopping State of Emergency) that Withering Surface achieve anything remotely original. Even the song Machinery, which offers a nod back to the band’s once melodic, Gothenburg-derived style, merely manages to sound like In Flames gone neo-thrash, and not very convincingly, at that. Plus, except for rare shots at actual singing or deep-throated cookie monster growls, Andersen’s nearly ubiquitous raspy shriek becomes as one-dimensional as it is grating after half an hour or so. Somewhat akin to Force the Pace as a whole, actually, leaving little hope that it will be able to catapult Withering Surface to the next level.