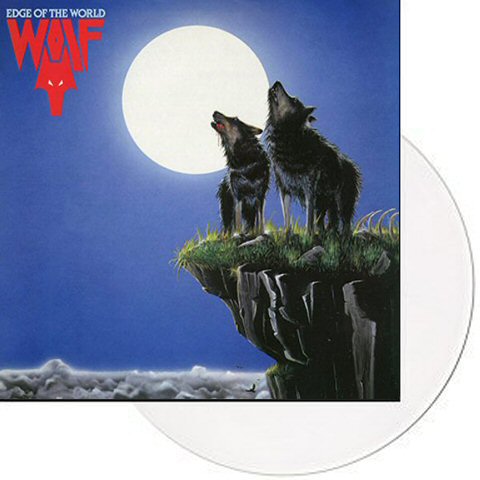 Many NWOBHM bands were awesome, but didn’t make it far. Wolf (aka Black Axe from Carlisle) is one of those bands who recorded awesome stuff, but never became well-known. Still, that should not prevent us from enjoying those lesser known bands and their albums. Edge Of The World is one of such albums. Forgotten gem? No doubt about it. Forming in 1977 under the moniker of Leviathan, by a group of talented young men – somewhat akin in this aspect to fellow greats Savage, the band honed their chops for several years before re-branding as Black Axe, and producing the strong, promising ‘Highway Rider’ single. Riding on the popularity of this single, which garnered strong sales, things were looking up for Wolf, who were bussed into the studio to record one helluva memorable slice of NWOBHM, before running into problems with, and eventually being axed by their stable, leaving the master tapes to collect dust for a few years, before finally being re-issued by European stable Mausoleum. What was contained therein, was a stellar, pinnacle effort from an above average NWOBHM collective. Not only did Wolf manage to squeeze out a full-length (something which seems to have eluded 50% of the coattail riding, pubescent bandwagoniers that characterized the movement), but they managed one which could inspire jealousy from almost all bands in the scene. ‘Edge Of The World’ is a stunning blend of Savage-esque attitude and toughness, mixed with dazzling displays of dirty Anvil/Ace Frehley-esque guitar squeals, and an almost unattainable understanding of thick, rich vocal melodies and hooks, matched by solid production and thorough originality. There’s a lot of variety on this album: some songs are fast (Highway Rider, Red Lights), others are slower (A Soul for the Devil), while the title track starts off slow, then morphs into something more upbeat, but every track is worth your time. Whether it’s a riff or a solo, something the singer does or something completely else, each track contains something that draws your attention, so you cannot go wrong with this. Speaking of the singer, Chris English, he’s one of the best singers I’ve had a pleasure to hear among NWOBHM singers. He has a great voice and he knows how to use it. Production is standard for that time: a bit raw, but that’s what gave many other albums from that time a lot of charm; this album is not an exception. If this album were over polished like, for instance, Def Leppard, it would be completely ruined. This record is just about the epitome of that classic NWOBHM sound. All-round musicianship, crisp vocal melodies, and an unfaltering line-up of songs means this one will remain part of the crème de la crème of NWOBHMs output forever.