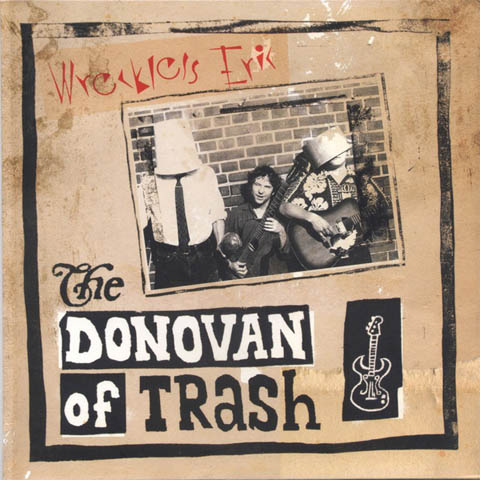 Wreckless Eric is often said to have enjoyed something of a comeback in the last months of the ’80s when he released his album Le Beat Group Electrique, but the truth is, he’d never really gone away, he just had a hard time getting enough people to pay attention to what he was doing with the Captains of Industry and the Len Bright Combo. Such is the fate of a cult figure, and it was more than fitting than in 1991, a fellow cult hero gave him another chance in the studio when Billy Childish released Eric’s The Donovan of Trash on his Hangman Records label. Like Childish’s best work, The Donovan of Trash is determinedly lo-fi, and frequently swings back and forth between the witty and the caustic, but the genuine charm and knack for keen lyrical observations that had always been a hallmark of Wreckless Eric’s work are very much in evidence, and while the rough-and-ready sound of the album is sometimes more murky than it needs to be, the performances are full of fire even when Eric seems to be veering off the main road, and the songs are great. “Joe Meek” is a loving but brutally honest homage to another great British eccentric, “Lureland” and “School” are a pair of bitter remembrances from childhood, “Harry’s Flat” and “Semi-Porno Statuette” are portraits of U.K. life that could have occurred to a rumbled and ale-sodden version of Ray Davies, “The Nerd/Turkey Song” is a first-class rocker about knowing one’s place in the social pecking order, and “Paris in June” is a celebration of the City of Light in which an unexpected rainstorm seems almost welcome to a Brit on holiday. The Donovan of Trash is as pure and engaging an expression of Wreckless Eric’s muse as anything he recorded during his glory days at Stiff Records, and the songs confirm he only improved as a tunesmith with the passage of time; few records this sloppy can honestly be called a real work of genius.