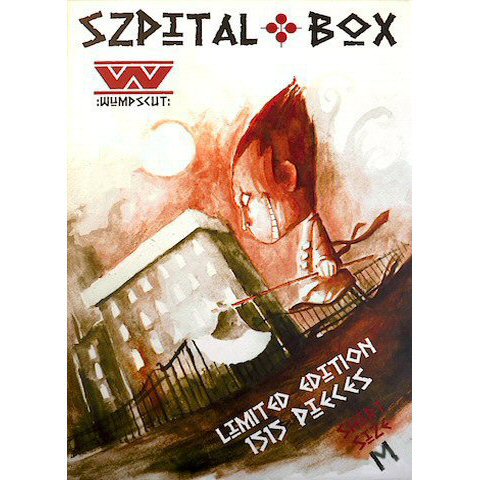 Rudy Ratzinger is another in the line of 90s goth musicians who forsook guitars for the sampler and synthesizer. He formed his Wumpscut project back in 1999 and soon got labelled “The Grand Guignol With A Beat” when he delivered minor hits like “Leeper Kid” and “Smell The Disgusting Sweet Taste Of Dried Blood”. His electro-industrial album Madman Szpital was released in 2013 and its an album that is technically as solid as always but it lacks the balance of lyrical content, beautiful synths and masterfully constructed rhythms that his earlier work. Listening to Madmam Szpital is rather like eating a vegetarian meal; you enjoy it but you can tell there’s something missing. Rudy Ratzinger is possibly the most prolific artist in the industrial scene, releasing an album every year not to mention his involvement in remixes. The curse of this is offering up a lot of filler material in amongst the gems. When he’s good he’s very good (Embryodead, Eevil Young Flesh), but when he’s poor he’s very very substandard (Bone Peeler, Body Census), with much of his work falling somewhere in-between. The first three songs throwing you straight into the fray. Opener Der Liebe Gott Sieht Alles sets the tone nicely, and will have you singing ‘the dearest God sees it all’ before the song is through. Tod Essen Leben Auf is ideal for the clubs with a pounding industrial beat, and a spattering of organ which drives the song along. And then on to the title track which slows things down with sparse instrumentation and an old sounding eerie piano. Musically the song picks up towards the end becoming more intense and the vocals becoming increasingly deranged. The middle of the album is where things almost spiral out of control. And not a good way. Ich Bin Der Tod has a trancy intro turning into an instrumental track save for a few sampled vocals. It’s pleasant enough, and thankfully doesn’t outstay its welcome, but you probably won’t be hitting the repeat button. Duke Of Death is instantly forgettable and Gabi Grausam, complete with heavily distorted vocals, is just a plain yawn fest. Du Neger, despite a promising premise of tackling racism, can also be added to the back seat. Fortunately, We Are Immortal is here to save with an excellent sounding beat. Although a little lacking in the lyrical department, it finishes in under 4 minutes and the music certainly makes up for any other inadequacies. Track 8, Moshe Tokoloshe, is a definite highlight of the album. If a scattergun could sound like music this is the song it would make. This is an ultimate audio assault on your senses, with a pummelling beat making you feel like you’re being gunned down in your living room as this pumps from your speakers. It is songs like this that truly remind us of the talent that is Rudy and his necessity in the industrial scene. In the end, is it worth it? It depends on what you’re looking for. Need a pretty decent album to spin? As usual, Wumpscut delivers. Need something cerebral? You couldn’t have asked for a worse album. It’s a matter of taste in the end – if you’re the kind of person who likes the musical equivalent of B movies, then yeah, pick it up. f you’ve missed Wumpscuts recent output and wonder how he’s sounding nowadays then this is a good place to start. If you’re brand new to him then perhaps start with some older material first, such as ones mentioned above, although Madman Szpital will give you a fair idea as to what he’s about. If you enjoyed Schrekk & Grauss you’ll probably enjoy this one too.