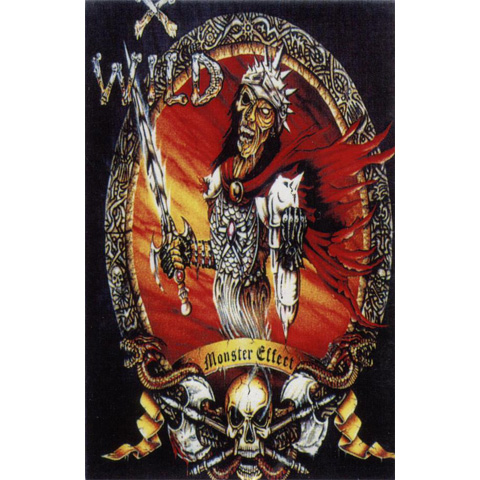 Running Wild vocalist/guitarist/songwriter/producer/dictator Rock n Rolf Kasparek has had many a band member walk the plank over the years, and what we have here is three of them; Stefan Schwarzmann (also ex-Accept and Krokus), Axel Morgan and Jens Becker (Grave Digger). Their music was a continuation of the classic Running style (known from albums such as ‘Blazon Stone’, ‘Pile Of Skulls’ or even ‘Port Royal’), coupled with the strong vocals, of the British vocalist Frank Knight. Band released three fantastic albums: ‘So What!’ in 1994, ‘Monster Effect’ in 1995, and ‘Savageland’ in 1996. With Rolf being the heart and soul of Running Wild, you’d think that attempting to duplicate their sound without him wound end up sounding like a disaster, but these guys actually do a pretty good job of it. Wild Knight begins the festivities with a great, atmospheric intro, melodic leads resounding deep within, before a very Kasparek charging rhythm. Souls Of Sin has a dash of Maiden and a pretty straightforward, catchy verse where Knight really lets his vocals wander. Good stuff. Theatre Of Blood may sound like an outtake from Death Or Glory, one of the tracks that best evokes the windy, glorious feel of that record, with an excellent maritime melody at around :50, and great vocals. Heads Held High rocks out, Dr. Sardonicus is no Dr. Stein, but it has a catchy, slow pace which is quite mighty in delivery. Sinners Are Winners is back in Running Wild’s 1989-90 territory, a scorcher with a nice piratic flair to the riffs. The title track commences the latter half of this slab, a fairly written mid paced classic power metal anthem with good vocals and atmosphere. Serpents Kiss is another biker-style rocker akin to Running Wild’s Raw Ride, or a good number of Accept tracks. Sons Of Darkness has a nice intro, with light bass and guitar melody, then a meaty rhythm which the band will also perfect on their third album. D.Y.T.W.A.C seems a rather roundabout way to exclaim the song’s chorus, ‘Do You Think We Are Crazy?’, an almost doom-like groove with a nice bridge and lead segment. The album ends with King Of Speed, one of its best tracks, even though it’s a multi-layered bass solo instrumental from Jens Becker. Seriously kick-ass, and probably would have worked even better as an intro to some epic historical track. Monster Effect with its majestic tones and bone crunching German Panzer power have enough melody and memorable sensitivity to keep any power metal fan thrilled through the 50 minutes of playtime.