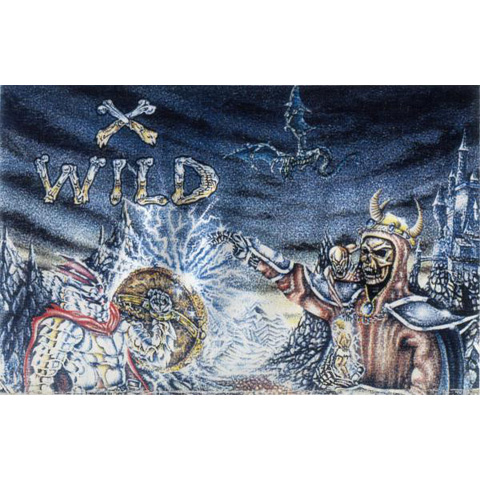 X-wild was a German heavy metal band, formed in 1992 by three ex members of Running Wild: Stefan Schwarzmann (also ex-Accept and Krokus), Axel Morgan and Jens Becker (Grave Digger). Their music was a continuation of the classic Running style (known from albums such as ‘Blazon Stone’, ‘Pile Of Skulls’ or even ‘Port Royal’), coupled with the strong vocals, of the British vocalist Frank Knight. Band released three fantastic albums: ‘So What!’ in 1994, ‘Monster Effect’ in 1995, and this their final album ‘Savageland’ that were released in 1996. Stefan Schwarzmann had left the band prior to this album and he was replaced by another Grave Digger member namely Frank Ullrich. This album is just like the two first one full-throttle Heavy Metal that sounds a lot like Running Wild with a dash of old Accept thrown in. Most of these tunes are full-on double-barreled stompers like ‘Braveheart’ and ‘Bred For War’. There are some slower cuts here too: ‘Children Of The Underground’ features a children’s choir on backup, ‘Dragonslair’ is a doomy, riff-heavy epic, and ‘Field Of Blackbirds’ is simply a great song. X-Wild shows a dedication to an old-fashioned metal-riff style that has largely faded from the scene these days. Any fan of Running Wild, Accept or any old-styled heavy metal needs this album. This album includes just one great metal-hammer tune after another so theres no reason not to love this band

Track listi:
1. Savageland-intro
2. Braveheart
3. Savageland
4. Bred For War
5. Murder In Thy Name
6. Children Of The Underground
7. Dragonslair
8. Die Like I Man
9. Field Of Blackbirds
10. Clash Of The Titans
11. Hunting The Damned
12. Chaos Ends