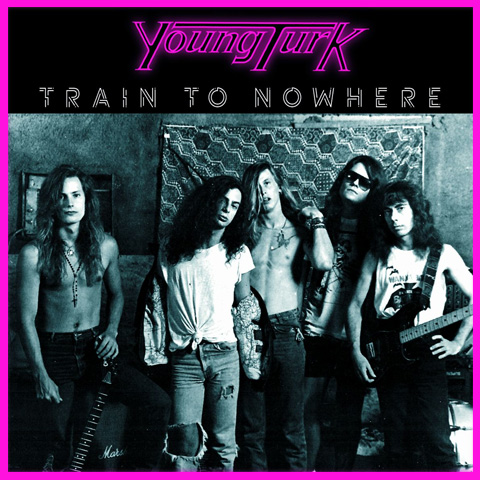 Young Turk was a band of young and hungry musicians, some not even old enough to drive when they started, that dropped out of high school to start their band. Miami wasn’t the hotbed for hard rock like other cities and with the larger bands like Rock City Angels moving to LA, Young Turk and Nuclear Valdez were left to rule the rock scene. The band released two releases on their own, Do You Know Where Your Daughters Are mini album (1987) and the Train To Nowhere cassette (1990). The band name came about when the band were reading about a group of rufffians in Europe and they felt the name seemed to fit their image. The band lived together, fought together and tried to learing how to write music at the same time. In the early years their skills might have been limited but they had the attitude, huge egos and though they had the world by the balls. Their 1987 debut Do You Know Where Your Daughters Are was recorded in Miami with a $2,000 budget. After that the band signed to a management team that would help them out with their Train To Nowhere album. The band were so excited to start recording. So excited that they showed up two months early to the beautiful Bear mountains in the town of Cortlandt. They rented a small cabin in the Bear mountains; where they would proceed to write the songs that would eventually make it to the record. They drove into the city to pick up weed and other essentials – and would trip the days away into their own version of the 60s. It was on the front steps of the cottage that they wrote their first local hit Train To Nowhere. As the months rolled by and the band finished the writing session they called their manager to tell them that they were ready and that they already were in Cortlandt. Even though the band had arrived a month early they hadn’t realized they were supposed to have landed in a town called Cortland not Cortlandt. So they were a few hundred miles away. So in the end the album would end up being recorded in Utica New York. It was the Train To Nowhere album that garnered attention from major labels and they were signed to Geffen Records. Geffen wanted the band to write a radio-friendly song, but the band refused to compromise their musical integrity, and Geffen released them from their contract. Then Virgin Records swooped in and signed the band in 1992. There they released their first official major label title, N.E. 2nd Ave. The timing however was bad and the album only had moderate success, which wasnt enough for a label like Virgin who soon dropped the band. So during their active years they never won any awards and the tours were limited and some of the band members were in and out of jail during their peak but they sure loved every minute of it. This compilation album features both the Train To Nowhere album and they Do You Know Where Your Daughters Are mini album.