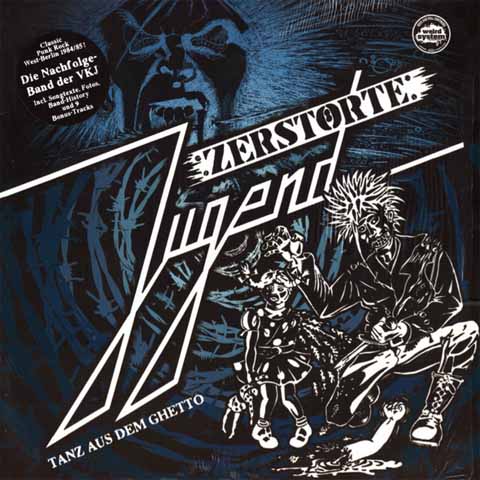 Zerstörte Jugend was a hardcore punk band from Berlin formed in 1983 as a side project to some of the bandmembers of VKJ (Vorkriegsjugend), which was a major favourit band to Pushead and MRR back in the days. Zerstörte Jugend only released one album back in 1984, and it has become one of the most sought after and rarest German punk LPs ever released. As I mentioned both Zerstörte Jugend and VKJ bands were closely intertwined: the Zerstörte Jugend consisted of the VKJ members Heiland, Bomber, Sepp and several friends from the direct VKJ environment. VKJ drummer Jürgen Heiland was the one doing the vocals for Zerstörte Jugend. His vocals are no less brutal and penetrating than the famous vocals of VKJ singer Klaus. However, this band used an absolutely distinctive style when mixing German punk songs with brilliant, gloomy doom punk, for example in classics like Schwarze Seele and Tanz Aus Dem Ghetto. This re-release also features the material from the Spastic Nightmare single and the exclusive compilation tracks the band made, meaning that it has all 19 tracks that the band ever released